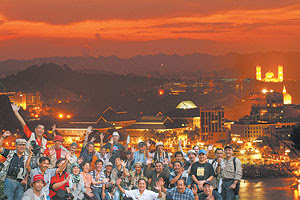 Their main objective was to take shots of Kg Ayer's sceneries before, during and after the sunset.

The programme began with a briefing on photography techniques and camera settings by Alirahim Hj Abd Rani.

The park, which has a number of vantage points, offers magnificent views of Kg Ayer, the Brunei River and - on a clear day - Mount Mulu in Sarawak.

There are also concrete walkways and viewing huts within the park.

"It is an exciting photo outing, as you need to climb a lot of steep stairs in order to get to the top and of course, that means you are also doing some exercise," said one of the participants.

After their session at Bukit Subok, the group later joined and experienced the Night River Cruise over Brunei River on pontoon boats. It is another new feature operated by AA Dolphin Dive for tourists.

After getting such exposure on the tour, it is hoped that the photographers got some good pictures to promote their works or add to their collection.