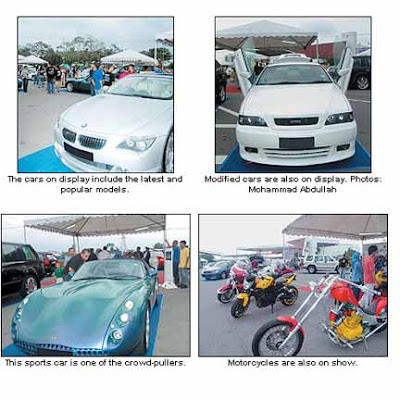 It seems that Tutong District is moving into top gear this year with various events planned to attract locals and tourists alike to visit Tutong.

One such event is the Tutong Motor Carnival 2006 organised by the Persatuaan Gemilang Daerah Tutong (Tutong District Gemilang Association) which is proving to be a big hit, attracting large crowds of car and motorcycle enthusiasts.

Major auto dealers are showcasing their latest and most popular models at the carnival, which officially opened yesterday and ends tomorrow at the Civic Centre in Tutong.

A stage was also erected to accommodate the night owls who love to watch shows by bands who will perform songs such as rock, pop, funk, ballads and even reggae in both English and Malay.

Children were also seen having a great time at the carnival as their parents and older siblings took a closer at the new models and modified cars on display.