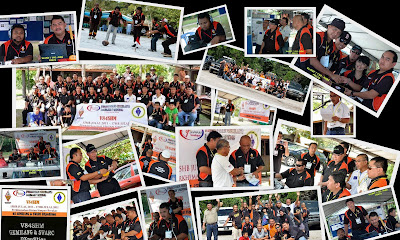 GEMILANG Amateur Radio Club under the Gemilang Association Tutong (Gemilang) has collaborated with SWARC Amateur Radio Club to organise a three-day Gemilang SWARC DXpedition.
Held from July 15 to July 17, 2011, the event was launched at the Berakas Forest Reserve.Abd Ahsunah Dato Lela Raja Hj Md Jair, chairman of Gemilang Amateur Radio Club said that the event was organised in conjunction with His Majesty's 65th birthday celebration.T
Throughout the three days, the participants took part in exhibition by visiting various landmarks in the Sultanate such as Kampong Ayer and Bandar Seri Begawan and all the while, being monitored and communicating through the use of amateur radio in which the main station being situated at the Berakas Forest Reserve.The chairman added that the event was organised to foster closer ties between the two amateur radio clubs.He further mentioned that the activity also served as a learning platform which will benefit both clubs.Gemilang Association Tutong is registered under the Registrar of Society, The Royal Brunei Police Force, Brunei Darussalam on November 4, 2004.
The association was set up with the objective to facilitate the development of leadership, management skills and the individual's potential by running interest-based activities in support of the nation's objective in shaping Brunei youths into excellence. The association's core activities are amateur radio, four wheel drive, photography and agriculture. Other activities include religious, social sports, cultural and traditional activities.
Source : The Brunei Times
http://www.bruneitimes.com.bn/#/happenings/2011/07/18/gemilang-and-swarc-radio-clubs-hold-3-day-dxpedition
Posted by Web Admin at 7/22/2011 11:32:00 pm